The drink Caiparinha was first made by Brazilian slaves in the1800s. It was made from boiled cane sugar juice and Cachaça, a spirit made from sugar cane. To this mixture was added fruit juice.

The name Caiparinha came from blending of two words Curupira…forest demon and Caipira a name used for the inhabitants of some remote rural areas.

Cachaça can be bought in good supermarkets. Its essential for an authentic Caiparinha.

Caiparinha is a delicious drink, especially on a hot day. I can only personally drink a couple before I start giggling.
It brings back memories of a vibrant, friendly country and the magnificent forest I love.
My first taste of this refreshing drink was on my first trip to the Amazon rainforest. I was hot and overwhelmed by the forest and this welcome ice cold drink was perfect. As I slowly sipped it through a straw, I relaxed, not knowing then how this beautiful forest would change my life.

New research has found a possible new source for the Amazon…..a river in Peru called the Mantaro or Great River.
The results of the research are questioned because the river dries up for four or five months a year, but if they are confirmed the Amazon will be officially the worlds longest river.

The Amazon is an incredible river. I first travelled on it when I went to see the Meeting of the Waters. The black waters of the River Negro and the tea-coloured waters of the River Solimoes flow side by side eventually blending to become, in Brazilian eyes, the great River Amazon. 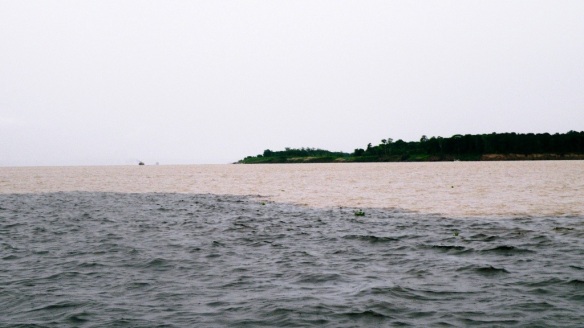 The river is huge, sometimes from one bank looking across, its impossible to see the other side, its so wide. And, it feels powerful too.
It is a busy river and getting busier. Transport ranges from small wooden canoes, ferries, on to massive world-class liners. 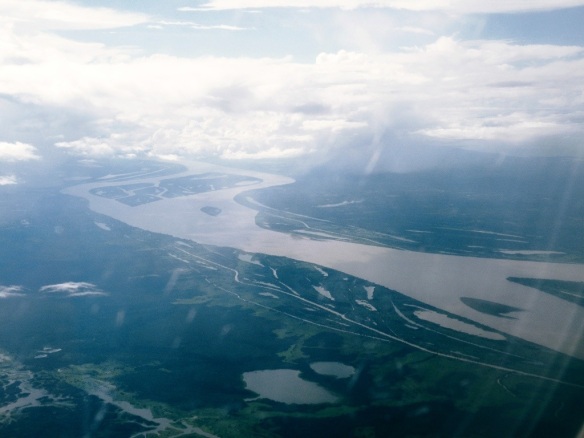 It has also been opened up by a new $400 million bridge the Ponte Rio Negro Bridge or Iranduba Bridge from Amazonia’s capital city Manaus across the river to small towns on the opposite shore.

I hear that it has already caused the deforestation of large areas as I feared when I saw the first parts of the huge structure being put in place. It was not obvious to the populace in Manaus what the bridge was for…. to open up the other shore for more farming and people, or for exploitation of gas or oil finds. Either way the forest would suffer and this is happening.
Nothing is sadder than driving along the road that used to be thickly lined with rainforest to see vast areas of nothing stretching into the distance and always a solitary Brazil-nut Tree in the middle as a reminder of what was. Wildlife and birds are non existent along the tarmacked roads.
Snuggling in small pockets along this road are small areas of thick forest and sparkling streams full of people enjoying what’s left. People escape to these spots in the evenings and at weekends, desperate to enjoy the ‘Green Effect’ that nature alone supplies….a feeling of well being that no amount of concrete and metal can reproduce in the concrete jungles of cities. 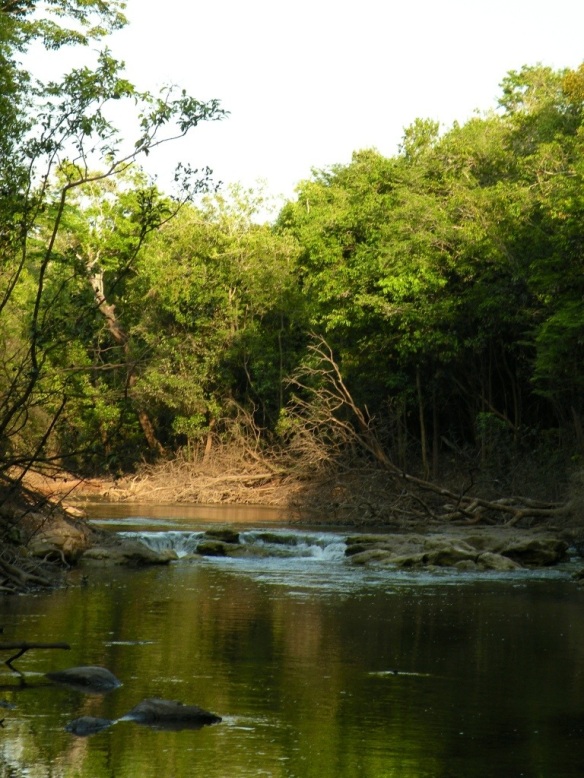 New study by the University of California, Berkeley, argues for new origin, according to a report by Jane Lee in National Geographic.
http://www.dailymail.co.uk/sciencetech/article-2559490/Have-finally-discovered-Amazons-source-Scientists-pinpoint-rivers-origin-60-miles-longer-thought.html#ixzz2tKnuRfzr

Manaus is the capital city of Amazonas. It grew into a major metropolis under the guidance of Eduardo Ribeiro with the help of the rubber boom.
With the collapse of the rubber market, the city lost some of its splendour, but the Opera House and some large, old, attractive houses can still be seen as testament to the boom time.
Manaus is now a Free Trade Zone, which draws in businesses and money and people.
At the heart of Manaus is the Opera House/Teatro Amazonas. A beautiful building of cream and pink, with a green, blue and yellow dome. Around this building is a large Parisian style square, full of mature trees, restaurants, Internet cafes and small, characterful, old houses. In front of the opera house is a large square, paved in a wavy design symbolising the ‘meetings of the waters’, with a fountain at its centre.
People of all ages gather in the area day and night. There are often open-air shows, with dancing, singing as well as religious conventions. The atmosphere is relaxed and happy.
I have spent many a day and night enjoying what the area has to offer, either alone or with friends.
Behind the Opera house is a busy, noisy high street full of shops of various sizes. They sell everything you could possibly want, clothes and shoes, cosmetics and medicines, electrical goods and souvenirs, food and drink.
The street opens out to the docks. A busy area with boats and ships of all sizes. Restaurants and bars provide food and entertainment. It will probably be from here that most tourists will catch a boat, or a taxi across the new bridge towards the rainforest.
Sadly once away from the Opera House, the houses, roads and pavements deteriorate.

There are favelas in Manaus, best visited with a guide. I visited a family in one. Sister-in-laws of a friend. I received a friendly welcome and felt quite at home, but I noticed the taxi driver wouldn’t leave his cab and looked nervous.
Some homes built by the river look Dickensian. Built of wood and placed higgledy-piggledy beside a river of unpleasant smelling water, I had to wonder how they didn’t fall down. House legs were mostly bent or broken. A flood a few years ago took with it many of these flimsy houses built by the river. The authorities have since built solid, brick homes to house the dwellers of the ramshackle wooden houses that were washed away. 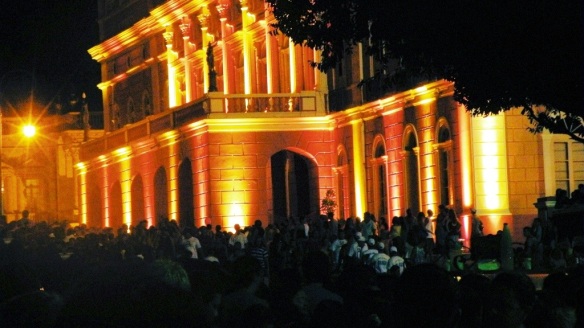 The ‘meeting of the waters’ is where the coffee-coloured Rio Solimoes meets the black Rio Negro to eventually blend into the great River Amazon. For some distance the two rivers move alongside each other and are clearly defined by their colours.

The weather in Manaus is hot and humid. The heaviest rains are in the wet season starting from late November until June. The dry season is during mid-year, July to October. Humidity is rarely below 80%.
It takes several days, at least, to acclimatise to the heat and humidity.

Manaus. Christmas in the Capital city of the Rainforest.

Manaus is a city of great contrasts. The area around the Opera House looks like it could be twinned with any European town centre.
The Opera House, a grand building, pink and cream with a yellow and green tiled dome, built in the late 1880s, is beautiful, especially in the evenings when bathed in light.
The surrounding paved square is tree lined, beyond which are pavement cafes and smart old houses, giving it a Parisian air.
There are often entertainments..music, theatre, dances held in the open air and sometimes religious events. Large stages are built overnight to allow for performances from singers, dancers, actors and preachers.
Christmas is no exception. The square has regular entertainment leading up to Christmas. A huge, brightly lit and beautiful tree is the centre of attention and the opera house looks even more splendid.
Evenings are often hot and humid so a cool drink taken in an open air cafe, whilst people watching, is a most pleasurable thing to do. Families, and young and old couples, holding hands walk slowly around the square, talking, teasing and laughing animatedly.
Beyond the square is the other side of Manaus. Crumbling infrastructure; broken, uneven pavements; graffiti sprayed and peeling plaster walls; shabby buildings.
But improvements are slowly being made and the shops lining the main road are modern and bright, add to that the vibrancy and warmth of the people and Manaus is a city with a future. Well worth visiting before diving into the surrounding Rainforest. 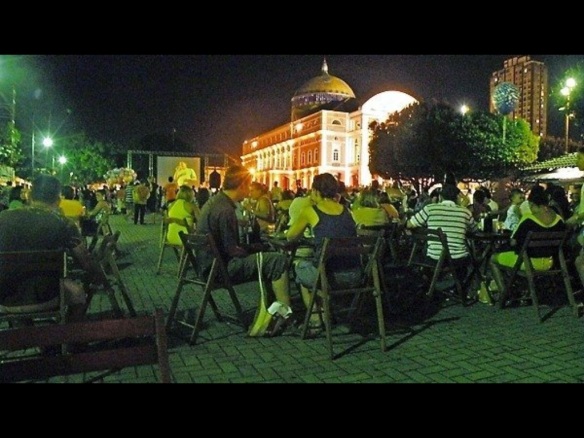