The Squirrel Monkey is a small species of monkey that moved behind the lodge early in the morning and returned in the evening.

I heard the Squirrel monkeys coming long before I caught sight of them. A rustle of leaves or the breaking of a twig or branch warned of their arrival. They were a large group of mixed adults, males, females often with babies, juveniles and youngsters.
The Squirrels have short hair, small bodies and long non-prehensile tails used for balance. They have short greyish-tan fur and white faces with dark foreheads and black muzzles. Delicately fingered hands are used for gripping and manipulating.
Squirrel monkeys eat fruits, figs being a favourite, insects, small animals and plants. Each day they would move through the trees behind the lodge and on into the deeper forest in search for food.
These monkeys are thought to be very intelligent with good eyesight, useful as their small size makes them a target for birds of prey and snakes.
Deforestation is a particular problem for Squirrel monkeys as they generally have large numbered troops which suffer if pushed into smaller areas resulting in lack of space and a limited food supply. 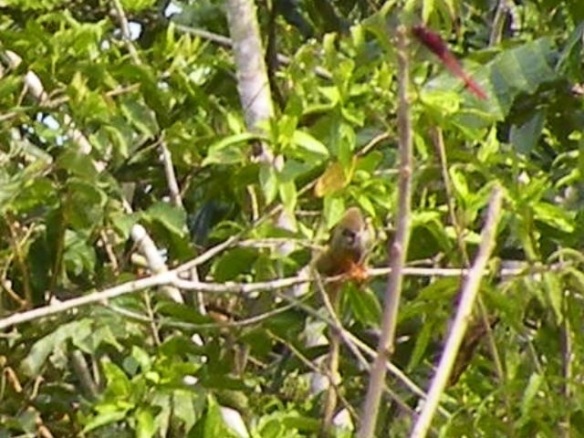 This is the scene I was usually faced with when searching the trees for a photo of the Squirrel Monkeys. Can you see the monkey?