It’s name sounded like something from a science fiction film and when I saw the illustration of the Trogon in a book, I did wonder if it was not a figment of someone’s imagination.
I had read in the book that Trogons were brightly coloured birds that perched half way between canopy and ground. They are shy and sit quietly for long periods, staying out of sight, making their presence hard to detect and observe.
It seems right then, that my first sighting of this bird, should be part of a strange tale.
It happened early one morning at breakfast. I looked up when I heard a loud, hooting call and saw this vision alight on a branch just metres away from me. I gasped.
The previous day I had been thinking about my problem stay in Brazil: the constant battle with bureaucracy, certain unhelpful people, my difficulties with the language and so on. I was hot and tired, weary of the struggle to get my home built.
It was a warm and sticky afternoon. Pushing my damp hair away from my face I spoke aloud to the trees. “I am so tired,” I said, “If you want me to stay send me a sign,” and then remembering the picture plate I had seen in the book that morning, “A Trogon, will do,” I said, shrugging in despair and feeling foolish talking to the forest.
I was absolutely shocked then when it appeared the next morning. I stared at it, afraid to move, and it just stared right back.
The Blue-crowned Trogons large, round, jet black eyes, are surrounded by a thin band of yellow. It’s head was blackish blue, the back and upper tail a deep turquoise, the wings pale greyish blue edged in black and the breast a soft red. On the underside of it’s long tail were striking black and white stripes. It was extraordinary.
I lifted my camera, it turned away, but did not fly off. Instead it perched on the same branch for quite some time, occasionally turning to look at me with those large, curious eyes.
I felt honoured. After the Trogon had flown off and I had recovered my senses, I turned towards the trees and, of course, loudly thanked the forest. 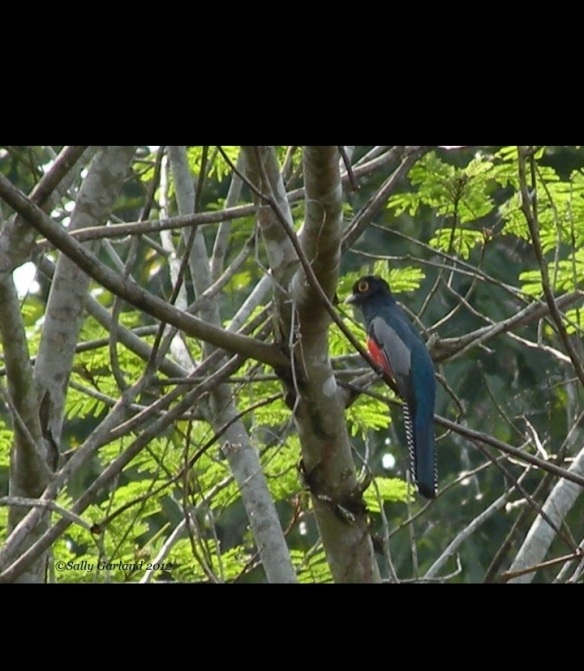