I was not a lover of fresh water fish before going to the Amazon, too many bones and a strong taste.
However, when you are hungry, almost anything looks appetising and I did, eventually, get used to the taste, and in fact, really enjoyed some of the varieties Monduco and I caught.
As the Amazon rivers contain over three thousand species of fish, its not hard to find some to tempt the taste buds.
Monduco cooked the fish on a makeshift barbecue….a platform of twigs. We had them with rice or potatoes and lemon from the plantation.
The Discus fish we often caught were a beautiful turquoise and black colour, almost too lovely to eat. The PeacockBass-Tucanare, with the eye shaped spot on its tail, was a favourite.

Piranhas were a surprise. Some varieties are large and they come in different colours: Red-Bellied, Black, Gold, Silver. They are tasty too, as can be seen in the photo of visitors to my home.

They were either caught by rod fishing or, the large ones, harpooned with a homemade spear. Fishermen also used small nets. In areas where fish gathered it was an easy way to capture breakfast. 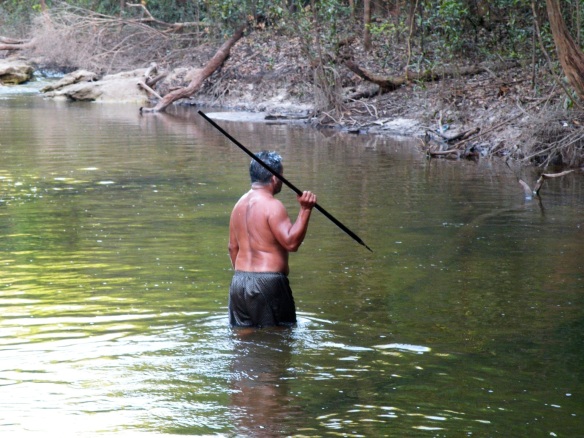 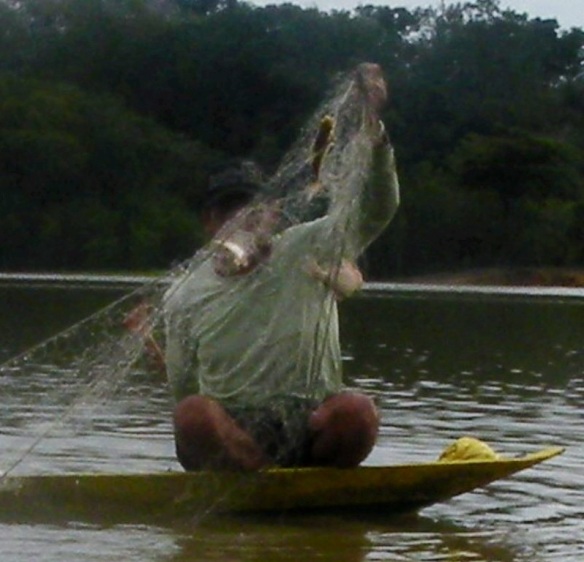 If we were very lucky we got a large fish like the Golden Dorado. The meat on a fish that large is similar to a piece of cod. It’s white and thick and delicious. With a squeeze of lemon from the plantation. Hmm, a real treat. 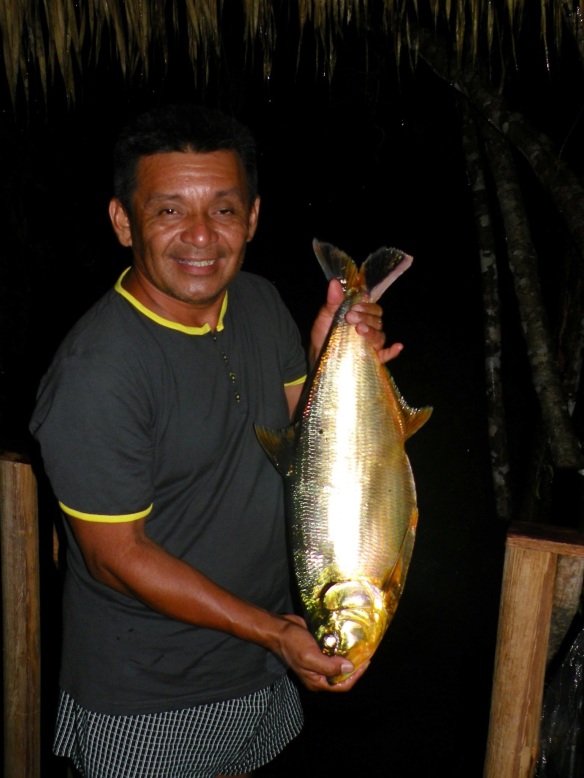 There were downsides to fishing though. If the catch was small in size, Monduco would put the fish altogether in a pot and boil them. Their eyes would stare out at me, glossy and blank. I could only eat the fish if Monduco beheaded them first, so I didn’t eat if they were boiled. The smell was horrendous and would hang around the kitchen for ages.

If Monduco caught a good haul of fish, too many to eat in one sitting, he would put them on a prepared wooden platform for days to dry in the sun. Again the smell was awful and attracted flies. I, wisely I think, didn’t eat the fish prepared in this way.

One evening on returning to the lodge, as we turned the boat to go towards the forest, Something suddenly hit me in the face. I jumped and yelled and then saw it was one of hundreds of silver fish flying through the air either landing in the boat with a thud or splashing back into the water.
There was no explanation to me about the flying fish, but maybe they were being chased by grey Bottle-nosed or pink Boto dolphins and flew from the water in panic. Or maybe it was the mating season for these fish. Some fish,like the Characins, can fly for short distances on winglike fins.

Another anomaly I saw was during the dry season. As the water levels decreased, leaving only shallow pools, noxious gases were released from the rotting vegetation/organic matter on the river bed, causing the death of fish which floated to the surface. The fishermen for a few days only had to wade through the mud to collect their daily meals.

Error: Twitter did not respond. Please wait a few minutes and refresh this page.